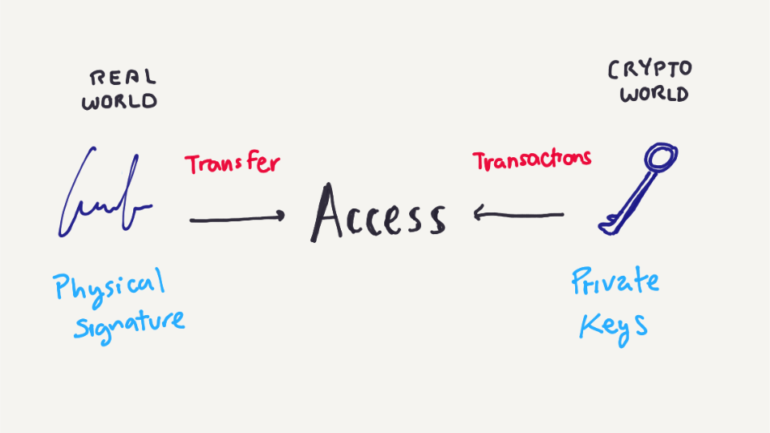 An Overview Of Private Keys

Private keys are also used in cryptocurrency transactions to prove ownership over the address on the blockchain. Private keys can be stored using hardware wallets, which utilize either smartcards or USB devices for offline generation and security of private keys. Public keys are created from private keys and are shorthand for wallet addresses, which can be used to deposit funds in someone else wallet.

A public key allows anyone to deposit digital tokens to any public address, but only holders of the unique private key can withdraw funds from their accounts.

The public key is used to obtain Bitcoins, and the private key allows a user to sign transactions, create a digital signature, and then spend Bitcoins. Private keys are used to verify the ownership of assets and to encrypt every cryptocurrency wallet, whereas public keys are used to derive the public addresses used to identify wallets and to receive funds. Private keys, in the context of blockchain assets, demonstrate ownership of assets associated with a specific wallet address and enable you to access and spend assets at that address.

A cryptocurrency wallet is also the place your keys live, whether they are private or public, giving you secure access to any cryptocurrency that you hold. You can think of a wallet as sort of an encrypted virtual keychain, holding all of the information needed to access your funds in the Bitcoin Blockchain. You can generate a Bitcoin address from your cryptocurrency wallet, should you wish to use one for transactions.

Anyone can deposit crypto into a public address, but funds cannot be removed from the address without a matching private key. Usually, the process of creating a pair of private and public keys starts when someone creates a new crypto wallet. An asymmetric algorithm generates private, and thus, public, keys assigned to every cryptocurrency user.

In brief, the algorithm in common usage is called RSA, or Rivest-Shamir-Adleman, which is used to produce both the private and the public keys. While Bitcoin does not take advantage of this early asymmetric encryption scheme, the basic principle underlying all public-key encryption is similar to the description of RSA described above. First, the user’s Bitcoin wallet uses a secure random number generator to create a seed, which can then be used to derive however many keys are needed by the user.

It is nearly impossible to reverse this process, creating a private key from the public key. A similar algorithm is then used to generate the receiving address from the public key. The transformation is a bit complicated and is better left to the computer, but the important thing is that the WIF guarantees that a WIF private key will always match the matching Bitcoin address, regardless of what software is used to convert it. Any Bitcoin sent to address 1cc3x2gu58d6wxuw_sample_address_did_not_send_mffpuzn9jaftuwu4kj may be spent by anyone who knows the private key that implemented it in one of three formats, no matter when the Bitcoin was sent, unless a wallet receiving them has made use of any coins generated by that time.